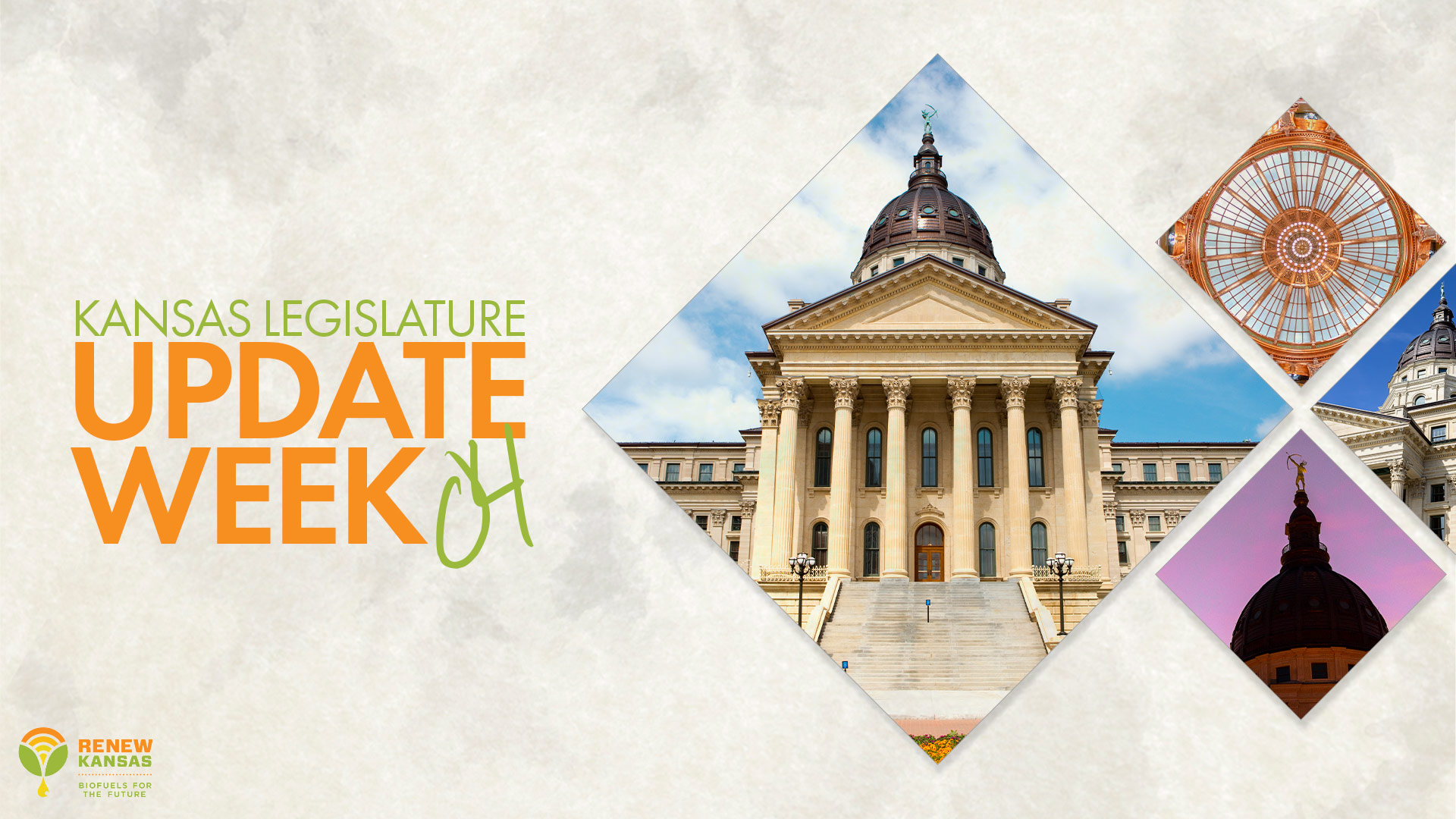 Posted at 17:09h in Advocacy by Editorial Team
0 Likes

This week brought continued discussions in multiple committees on the issue of fraud on the Kansas state unemployment fund. It is thought that fraudulent claims paid-out over the last year could be as high as $400 million. Regarding the total number of new unemployment claims, Kansas is second only to the state of Illinois. Governor Laura Kelly has budgeted money for IT system upgrades for the Kansas Dept. of Labor (KDOL) in order to respond to the problem, and legislation has been introduced to hold Kansas employers harmless on rebuilding the fund. Other news this week saw passage of a Senate resolution urging Governor Kelly to rescind her policy on providing COVID-19 vaccines to prisoners before other Kansans; the roll-out of legalized gaming bills, the passage of which would likely bring in new revenues to the state; and, an announcement by Governor Kelly supporting the possible legalization of medical marijuana in Kansas to help pay for expanding Medicaid to uninsured Kansans.

This week saw additional hearings on the unemployment insurance fraud issue, where the KDOL testified that, after implementing additional security measures, the agency had stopped more than 500,000 fraudulent log-in attempts to the state’s unemployment insurance system. In addition, the House Appropriations Committee heard House Bill 2195 which would hold Kansas employers harmless for fraudulent unemployment claims, and provide for reimbursement of the Unemployment Insurance Trust Fund through with money from the State General Fund (SGF). The actual amount to be transferred from SGF would be determined following the certification of all fraudulent claims, but estimates could be as high as $400 million. The bill also includes a 20-year review into past fraud claims to ensure that the credits are applied to employer accounts regardless of whether the reimbursements from fraudulent parties have been secured. Also, the House Commerce Committee held hearings on a similar bill, House Bill 2196. Along with the provisions in HB 2195, this bill allows for the creation of an Unemployment Compensation Modernization and Improvement Council. Kansas Grain and Feed Association, Kansas Agribusiness Retailers Association and Renew Kansas Biofuels Association provided testimony in support of both bills.

This week, the Senate Tax Committee amended Senate Bill 22 and advanced the bill to the full Senate. The bill would exempt certain types of foreign corporate income from taxation (repatriated income and global intangible low tax income/GILTI) that is now taxable at the state level following passage of the federal tax cuts and jobs of 2017. The bill emerged from committee with an estimated cost of $175 million in the first year, compared to $326 million in the original bill. Over three years, the amended bill would cost an estimated $422 million. Governor Kelly has intimated that she would likely veto this legislation due to its cost to the state. The committee amended the bill to remove a provision that would have allowed businesses to seek refunds for taxes they paid in previous years. Other amendments include:

This week the Senate Committee on Local Government took action on Senate Bill 52, a bill which would allow the board of Sedgwick County Commissioners to order the removal or abatement of nuisances from any land within an unincorporated area of the county, with any incurred costs paid by the owner. Kansas Grain and Feed Association worked with other stakeholders in securing an amendment to exclude the bill from having any effect on ag land, commercial grain elevators, or agribusiness facilities. The committee amended the bill and passed it out favorably out of the committee.

A hearing on House Bill 2155 was held on Thursday, February 4 by the House Committee on Agriculture. The bill would authorize the Kansas Dept. Health and Environment (KDHE) to establish reportable minimum quantities of chemical spills in rules and regulations. Currently, all hazardous chemicals spills must be reported to KDHE, regardless of the amount. This bill would also allow the agency to provide technical guidance during a clean-up response, and permit cost-recovery from the responsible party for any state expenses for response to a release. In addition, the bill would allow KDHE to levy penalties for illegal dumping, refusal by a responsible party to clean up a release, or failure to timely report a release. In previous years, Kansas Grain and Feed Association and Kansas Agribusiness Retailers Association worked with KDHE and other stakeholders to amend the bill to limit the effect on agriculture chemicals, and limit the total civil penalty authority. KDHE has indicated that it intends to establish minimum thresholds in rules and regulations that are consistent with federal requirements. With those provisions, your association testified in support of the bill.

Kansas has the highest utility rates in our region. This important issue resulted in the Legislature, in 2019, commissioning a study to determine the reasons for these high electric rates and ways in which they might be lowered. Last year, legislation was successfully passed which removed the income tax assessment on certain public utilities, and required the savings to the utilities to be passed on to rate payers. This measure was estimated to save Kansas residential and industrial rate payers over $40 million annually. New legislation has been introduced this year to seek further reductions in the high utility rates. Senate Bill 80 and House Bill 2180 would require energy companies to have any delivery rate changes approved through the Kansas Corporation Commission (KCC). The House Committee on Energy and Utilities will hear House Bill 2180 on Thursday, February 11. Senate Bill 81 and House Bill 2181 would require the KCC to provide the legislature with an annual report covering electric public utility rates across the region. The Senate Utilities Committee will hear SB 81 on Wednesday, February 10th while the House Energy and Utilities Committee will hear HB 2181 on Tuesday, February 9th.

This week, a House Budget Committee reviewed the Governor’s proposed budget for the Kansas Dept. of Agriculture (KDA). For the current fiscal year 2021, Governor Kelly recommends total agency expenditures of $57.4 million, including a $9.4 million reduction from the State General Fund (SGF). This includes an all funds increase of $1.5 million (2.7 percent) and a SGF decrease of $420,178 (4.3 percent). The application of a 5 percent shrinkage rate is responsible for the SGF decrease. For FY 2022 the Governor recommends an all funds decrease of $2.8 million (5.4 percent) and a decrease from the SGF of $990,684 (10 percent). Along with the recommended reduced resource budget, the application of a 5 percent salaries and wages shrinkage rate contributes to this decrease in funding.

This week, the Senate passed Senate Bill 15, a bill that would create a new Economic Recovery Linked Deposit Loan Program for businesses in response to the economic downturn caused by the COVID-19 pandemic. This 10-year program, administered by the State Treasurer, would allow up to $60 million available for low-interest businesses loans (2 percent below market rate). The loans would be capped at $250,000. Renew Kansas Biofuels Association joined other industry stakeholders in supporting the bill. Senate Bill 15 will now be heard by the House Committee on Financial Institutions and Rural Development on Monday, February 8.

On Thursday, the Senate Commerce Committee held a hearing on Senate Bill 65, a bill relating to the High Performance Incentive Program (HPIP) economic development program. The bill would decouple certain workforce training requirements from the program. Under current law, taxpayers that claim the HPIP investment tax credit are required to participate in either the Kansas Industrial Training (KIT) or Kansas Industrial Retraining (KIR) programs. HB 2097 would decouple the tax credit from participating in those programs. Removing the training requirement from HPIP will provide more flexibility in using the training programs, and will likely increase the number of companies that qualify for the HPIP tax credit. On Tuesday, the House Commerce Committee passed companion bill House Bill 2097 favorably out of committee.

On Wednesday, February 3, the House Committee on Local Government held a hearing on HB 2177, a bill which would help local units of government consolidate more easily by establishing a procedure for cities or counties to assume the powers, responsibilities, and duties of any special district located within a city’s corporate limits or a county’s boundaries and would provide for the dissolution of the special district. Special districts would include airport authorities, cemetery districts, draining districts, fire districts, port authorities, and similar taxing authorities. Enactment of the bill could result in efficiencies and consolidation of services, which may decrease expenditures for local units of government. Proponents to the bill included the League of Kansas Municipalities, Kansas Grain and Feed Association, Kansas Agribusiness Retailers Association, Renew Kansas Biofuels Association, and the Kansas Chamber.

On Tuesday, February 2, the House Committee on Federal and State Affairs advanced favorably from committee House Bill 2087, a bill which would amend the process by which administrative rules and regulations are adopted by state agencies. The bill would omit the requirement that economic impact statements prepared by state agencies contain an estimate of the total implementation and compliance costs that are reasonably expected to be incurred by or passed along to businesses, local governmental units and members as a result of a proposed rule, expressed as a single dollar figure. The implementation and compliance costs would be separately identified for the affected businesses, local governments, and members of the public. The Kansas Grain and Feed Association, Kansas Agribusiness Retailers Association, and Renew Kansas Biofuels Association were proponents to the bill.

This week, the Senate Tax Committee held a hearing on Senate Bill 72, which requires the courses necessary to qualify for the designation of a registered mass appraiser and all necessary continued education appraisal courses to be approved by the Kansas real estate appraisal board. County appraisers across the state hold important and demanding positions, and their work product directly affects the tax bills of each property tax payer. This legislation would improve the property tax system by ensuring the quality of education provided for county appraisers. Your association, along with the Kansas Cooperative Council and Kansas Chamber, provided proponent testimony during the February 4th hearing.

The House Committee on Taxation heard House Bill 2023 on Wednesday, February 3. The current method of determining property taxes on agricultural land is based on a moving average formula, while the proposed legislation would create an 8-year simple average formula. The original legislation was intended to decrease variability in property taxes year-to-year. The changes proposed in this bill would cause lower income years to more quickly lower property taxes, though this volatility would also apply in high income years. Kansas Farm Bureau’s opponent testimony expressed concerns with the increased volatility, stating that this is not the best approach.