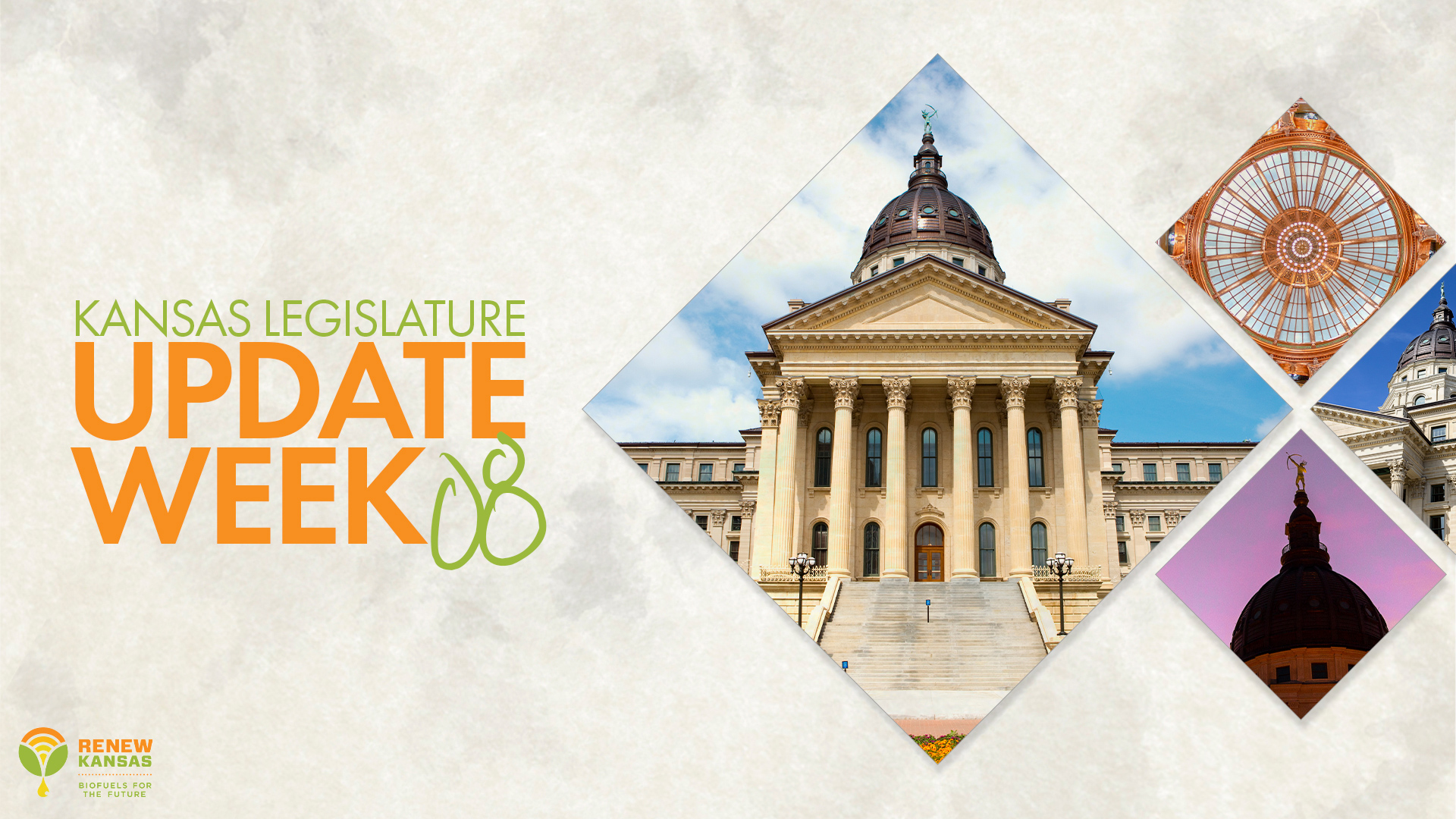 Posted at 15:09h in Advocacy by Editorial Team
0 Likes

This week was Turnaround – the initial deadline for each chamber to pass its own bills. Any bill not passed by the full House or Senate this week is now dead for the year, unless it was introduced in one of a few select committees. This means that the House and Senate spent much of the week on the floor debating bills that had advanced favorably from committees, including expanded sports gambling, and emergency passage of a bill to provide municipalities with financial assistance for increased natural gas prices. After taking a few days off, the legislature will return next week to begin committee work on the state budget and on the many bills that were just passed by the opposite chamber. Please find updates on specific legislation, below.

Following historic increases in natural gas prices during the February polar vortex, many Kansas municipalities faced gas bills that would likely be unpayable. The municipalities risked losing access to natural gas within days if they did not pay their bills. In response, the legislature quickly passed a bill this week to provide $100 million in low-interest loans to Kansas municipalities to help spread out the cost of their natural gas bills over time. House Sub for Senate Bill 88 establishes a low-interest loan program which allows cities to apply to the State Treasurer for loans from state unencumbered funds. These loans must be for the purpose of lowering the immediate impact of the spiked electric and gas costs. The interest rate would be set at 2.0 percent below the market rate with a minimum of 0.25 percent. The bill was structured similar to Senate Bill 15 which created an Economic Recovery Linked Deposit Loan program for businesses in response to the economic downturn caused by the COVID-19 pandemic. The legislation was heard and passed by the House and Senate and then signed into law by Governor Laura Kelly.

During the House Session on Thursday, March 4, Sub for House Bill 2196 passed on an 87-36 vote. This bill would hold Kansas employers harmless for fraudulent unemployment claims, require the department to modernize its information technology infrastructure, and allow for the creation of an Unemployment Compensation Modernization and Improvement Council and provide for reimbursement of the Unemployment Insurance Trust Fund with money from the state general fund (SGF) or CARES Act funding. In addition, it would prohibit the continuation of federal unemployment compensation programs using state funds and other provisions.

The Senate Commerce Committee previously held a hearing on Senate Bill 213, which would prohibit employers from mandating vaccinations for their employees. Senator Mark Steffen, R-Hutchinson – who introduced the bill – has framed it as a way of preserving the decision-making process for individual employees. At least 23 states have considered similar requirements, although none have advanced in the legislative process. Kansas may be the first state to impose such a requirement through this bill. Both Governor Kelly and the Kansas Chamber have recorded their opposition to this legislation, stating that this legislation is unnecessary. This week, Senate Bill 213 was referred to the Senate Committee on Federal and State Affairs in order to survive the Turnaround Day in the legislative process. The bill will likely be referred back to Senate Commerce Committee.

This week, the Senate passed Senate Bill 91 on a vote of 34-5. This bill would allow for the transferability of High Performance Incentive Program (HPIP) fund tax credits. Under current law, HPIP provides certified companies a 10.0 percent non-refundable income tax credit for eligible capital investments that exceed $50,000 ($1.0 million in five metro counties) that can be carried forward for the next 16 tax years as long as the company is recertified in the tax year that the carry forward is used. SB 91 would allow taxpayers to transfer up to 50 percent of those tax credits for projects placed into service on and after January 1, 2021. The transferred tax credits would be required to be claimed in the same year as the transfer and the remaining tax credits for the original taxpayer would be allowed to be carried forward for up to 16 tax years. The taxpayer or transferee would be required to notify the Department of Revenue about the tax credit transfer. If the HPIP tax credits are later disallowed in whole or in part, the original taxpayer would be liable for repayment to the state.

Also on HPIP this week, the House unanimously passed House Bill 2097. Under current law, taxpayers that claim the HPIP investment tax credit are required to participate in either the Kansas Industrial Training (KIT) or Kansas Industrial Retraining (KIR) workforce training programs. The bill would decouple the tax credit from participation in those programs. This change is intended to provide more flexibility in using the training programs, and increase the number of companies that qualify for the HPIP tax credit. Last week, the Senate passed a companion bill, Senate Bill 65, on a unanimous vote.

This week, the Senate heard, and passed, Senate Bill 283 on a vote of 31-8. The bill amends the COVID-19 Response and Reopening for Business Liability Protection Act to extend the expiration date of the statute governing COVID-19 claim immunity for persons or agents of persons conducting business in the state by one year, until March 31, 2022.

This week, the House passed Senate Bill 13 favorably on a vote of 120-3. This bill will repeal the existing property tax lid – put in place by the legislature in 2015 – which requires a vote of the public to increase property taxes above a certain threshold. The lid generally required voters to approve local property tax increases higher than inflation from the previous year. Supporters of SB 13, however, believed the property tax lid is ineffective because it has too many exemptions that were used to recategorize spending so it wouldn’t be covered by the cap. SB 13 also requires notice and public hearings in order for any taxing authority to increase taxes above a revenue neutral rate. Other provisions in the bill would prohibit valuation increases due to normal maintenance, and allow the collection of partial payments or establishing payment plans for property taxes. The Senate had passed the bill on a vote of 34-1. The bill now heads to a conference committee where differences between the House and Senate version will be worked out. Governor Kelly has also indicated that she favors property tax reform.

SB 23 would allow the owner of property that has been destroyed or substantially destroyed by a declared disaster to apply to the county commission for a property tax abatement or credit. The bill was supported by Kansas Grain and Feed Association, Kansas Agribusiness Retailers Association, and Renew Kansas Biofuels Association.

SB 98 would ensure that, in a hearing before a Kansas District Court, the county retains the burden of proof on the county appraiser’s valuation and classification. The bill also extends the time a state board of tax appeals member may continue to serve after such member’s term expires. In addition, the bill would allow the Governor to temporarily appoint former board members as necessary. Kansas Grain and Feed Association and Renew Kansas Biofuels Association were proponents to the bill.

SB 119, explained in greater detail here, includes many positive changes to the Kansas property tax system that were spread out over a handful of bills last year. Kansas Grain and Feed Association and Renew Kansas Biofuels Association testified as proponents.

SB 72, would require appraisal courses necessary to qualify for the registered mass appraiser designation, and all continuing education courses, to be approved by the Real Estate Appraisal Board. The bill would require the Director of the Property Valuation Division at the Department of Revenue to only accept appraisal courses approved by the Real Estate Appraisal Board as alternatives to the courses required to be conducted by the Director. Kansas Grain and Feed Association, Renew Kansas Biofuels Association, and Kansas Agribusiness Retailers Association were proponents.

On a vote of 119-4, the House passed House Bill 2315 which would provide taxpayers an income tax credit for contributions made directly to technical colleges. The bill would create the Higher Education Deferred Maintenance Tax Credit, which allows a 100 percent refundable income tax credit for qualifying contributions to a technical college for capital improvements, deferred maintenance, or the purchase of technology or equipment beginning in tax year 2021 and continuing through tax year 2025. The bill would limit the total amount of tax credits that could be claimed to $3.5 million in any tax year, including limits of $500,000 for either a technical college or a taxpayer.

HB 2066: expands the military spouse and service member’s expedited licensure law to all applicants who have, or intend to, establish Kansas residency. Passed by the House 103-21.

HB 2106: extending the filing date for corporate income tax returns. House passed the bill on Thursday with an unanimous vote.

HB 2145: exempting the retail sale of electricity by public utilities for electric vehicle charging stations from the jurisdiction of the state corporation commission. Passed the House 124-0.