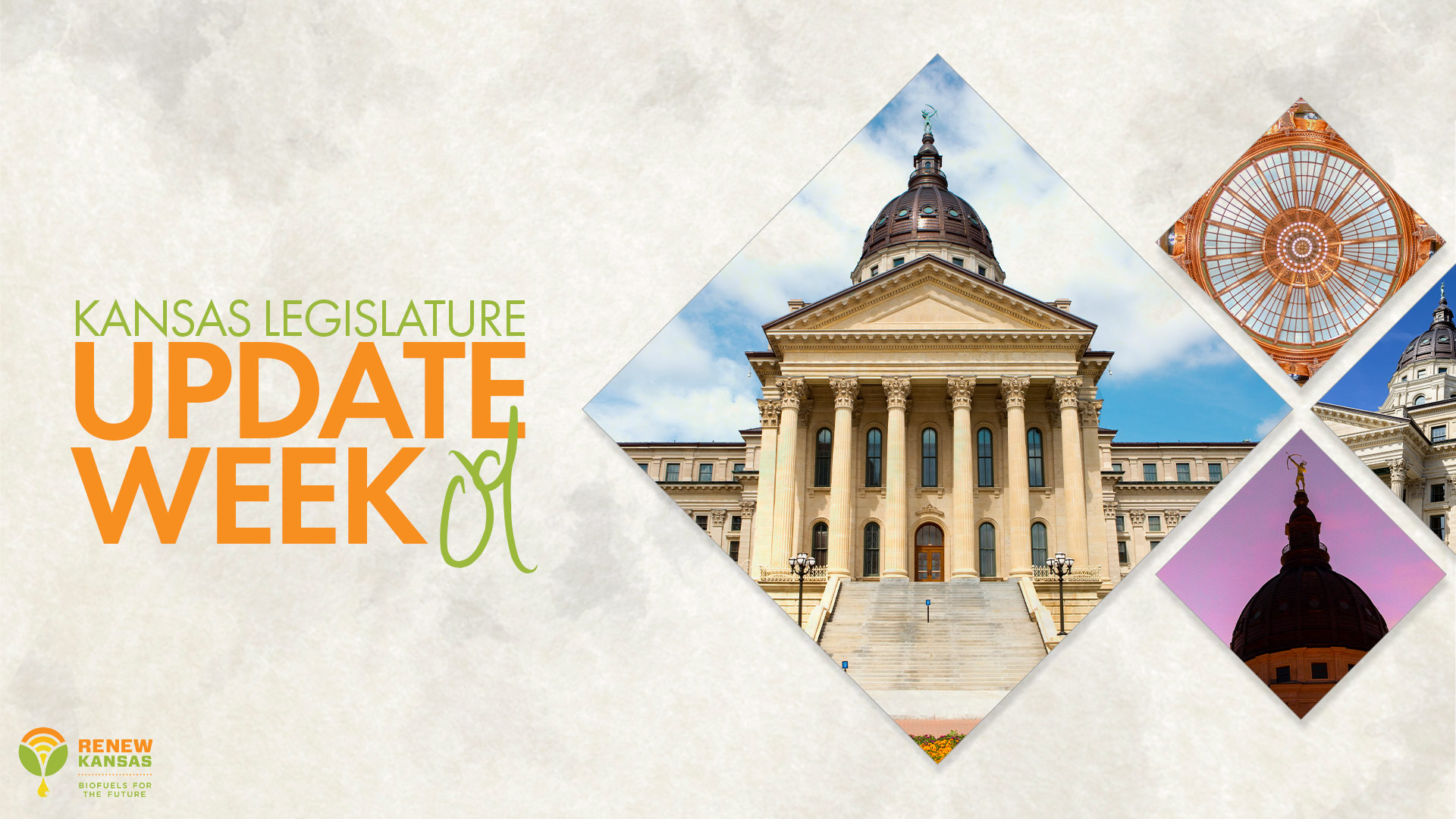 Posted at 17:45h in Advocacy by Editorial Team
0 Likes

This was a short week in the Kansas Legislature, with the House and Senate returning to committee work on Wednesday. Highlights for this week include the swearing in of a new Senator Ron Ryckman Sr., from Southwest Kansas (father of House Speaker Ron Ryckman, Jr.), additional committee work on the state budget, and passage on final action of a property tax transparency bill that will now be sent to Governor Laura Kelly. Next week will bring hearings on many bills passed by the opposite chamber. Please find additional information below.

Kansas has the highest utility rates in our region. This important issue resulted in the Legislature commissioning a study in 2019 to determine the reasons for these high electric rates and ways in which they might be lowered. Next week, the Senate Committee on Financial Institutions has scheduled continued hearings on Senate Bill 245. Referred to as “securitization,” this bill would create the Kansas Grid Resiliency, Innovation and Dependability Act. The bill would authorize the Kansas Corporation Commission to regulate and authorize issuance of ratepayer-backed securitized bonds for the financing of capital expenditures that are currently included (recovered) in the rates assessed by an investor-owned utility in the state (Evergy). Proponents to the bill included a large utility company and the Sierra Club. However, the bill does not currently require any cost savings to be passed along to rate payers.

The State Department of Labor has reported that Kansas unemployment was at 3.5 percent in January – a substantial improvement from the 4.7 percent reported in December 2020. This rate was still a bit higher than the 3.1 percent reported in January 2020. The unemployment trust fund balance on March 6 was at $264.9 million. This was down from about $275 million a week earlier, and $990 million on March 7, 2020. Reports of fraudulent payments made from the fund, over the last year, range between $290 million and $600 million. This coming week, the Senate Commerce Committee will hold daily hearings on Sub for House Bill 2196, a bill that would hold Kansas employers harmless for fraudulent unemployment claims, require the department to modernize its information technology infrastructure, and allow for the creation of an Unemployment Compensation Modernization and Improvement Council and provide for reimbursement of the Unemployment Insurance Trust Fund with money from the state general fund (SGF) or CARES Act funding. In addition, it would prohibit the continuation of federal unemployment compensation programs using state funds and other provisions.

For nearly two years, Renew Kansas has worked with Kansas Corn and the Kansas Dept. of Health and Environment (KDHE) to encourage EPA to strike the low RVP gasoline requirements which were barring the biofuel blend from being sold year-round in both Kansas City, Kansas and Missouri.

“We are thrilled EPA has approved removing low RVP requirements in the Kansas City metro area,” said Bill Pracht, Chairman of Renew Kansas Biofuels Association. “This will allow for cleaner, cheaper, Kansas-grown fuel to be purchased year-round in Kansas City, which is great news for the metro’s air quality, consumers and the Midwest’s agriculture economy as a whole.”

Low RVP fuel was required by state regulation as part of a federally approved plan in Kansas City to help reduce volatile organic compound (VOC) emissions that produce ozone. Sources of VOCs include emissions from gasoline and motor vehicles. With stricter national vehicle and fuel requirements this metro area low RVP requirement is no longer needed. The removal of the requirement affects sales in Johnson and Wyandotte counties in Kansas; and Jackson, Clay, and Platte counties in Missouri.

The regulation prohibiting higher blends of biofuels being sold in Kansas City during the summer months dates back to the 1971 federal Clean Air Act where both Kansas and Missouri entered into EPA-approved State Implementation Plans (SIP) to assist Kansas City in attaining compliance with the national ambient air quality standard (NAAQS) for ozone.

“We are very pleased with the outcome of this project and for EPA’s willingness to evaluate an outdated regulation,” Renew Kansas President and CEO Ron Seeber said. “Allowing the sale of higher blends of ethanol fuel in the Kansas City area will directly benefit fuel retailers, consumers, farmers and the Kansas ethanol industry. This rule change presents a solid win for Kansas.”

The House Committee on Appropriations, and the Senate Ways and Means Committee, are working bills that include appropriations to state agencies for the remainder of the current fiscal year and fiscal year 2022. House Bill 2396  and Senate Bill 267 include fiscal year 2021 expenditures of $21.3 billion, with $7.6 billion financed through the State General Fund (SGF). The Senate Ways and Means Committee continued hearings on Senate Bill 267 this week, adopting an amendment to direct $60,000 of SGF to the Kansas Dept. of Agriculture’s Grain Warehouse Program in order to supplement the fee increases proposed by the agency in Senate Bill 143. In addition, the Committees are holding hearings on bills making supplemental appropriations for fiscal years 2021 through 2032 for various state agencies in House Bill 2397 and Senate Bill 268.

On Wednesday, March 17 the House Committee on Taxation will hold a hearing on House Bill 2421, a bill which includes corporate income tax modifications for global intangible low-taxed income, business interest, capital contributions, and FDIC premiums; allows an individual to itemize deductions despite not itemizing their federal return; and exempts from income compensation due to unemployment insurance ID fraud. A similar bill, Senate Bill 22, was passed by the Senate but seems to have stalled due to amendments which created a large fiscal note.

This week, the Senate passed Senate Bill 13 on a final action by concurring with amendments made to the bill by the House. The bill now advances to the Governor for consideration. This bill will repeal the existing property tax lid – put in place by the legislature in 2015 – which requires a vote of the public to increase property taxes above a certain threshold. The lid generally required voters to approve local property tax increases higher than inflation from the previous year. SB 13 also requires notice and public hearings in order for any taxing authority to increase taxes above a revenue neutral rate. Other provisions in the bill would prohibit valuation increases due to normal maintenance, and allow the collection of partial payments or establishing payment plans for property taxes.

House Bill 2155 would authorize the Kansas Dept. Health and Environment (KDHE) to establish reportable minimum quantities of hazardous chemical spills in agency regulations. Currently, all spills of hazardous chemicals must be reported to KDHE, regardless of the amount. This bill would also allow the agency to provide technical guidance during a clean-up response, and permit cost-recovery from the responsible party for any state expenses related to a response to a release. In addition, the bill would allow KDHE to levy penalties for illegal dumping, refusal by a responsible party to clean up a release, or failure to timely report a release. KDHE has indicated that it intends to establish minimum thresholds in agency regulations that are consistent with federal requirements (EPA’s list of lists). During the Senate Agriculture and Natural Resources Committee meeting on Friday, March 13th Renew Kansas Biofuels Association, Kansas Agribusiness Retailers Association and Kansas Grain and Feed Association testified in support of the bill. In previous years, those associations worked with KDHE and other stakeholders to amend the bill language to limit the total civil penalty authority and limit the effect on agriculture chemicals.

On Friday, March 12, the House Commerce Committee passed House Bill 2287 out of committee favorably. This is a workforce development bill that would create the Kansas Promise Scholarship Act to provide postsecondary education scholarships to students attending any Kansas community college, technical college, or two-year associate degree program or career and technical education program offered by a private postsecondary educational institution accredited by the Higher Learning Commission with its primary location in Kansas. The bill – supported by Kansas Grain and Feed Association, Kansas Agribusiness Retailers Association, and Renew Kansas Biofuels Association – will be debated by the full House on March 15.

SB 50: requiring marketplace facilitators to collect and remit sales, use and transient guest taxes. Passed the Senate on a vote of 35-3 on Thursday, 3/11.

SB 149: provides reimbursement of property taxes for business shutdown or capacity limitation caused by the county. Heard in Senate Tax Committee on Thursday, 3/11.