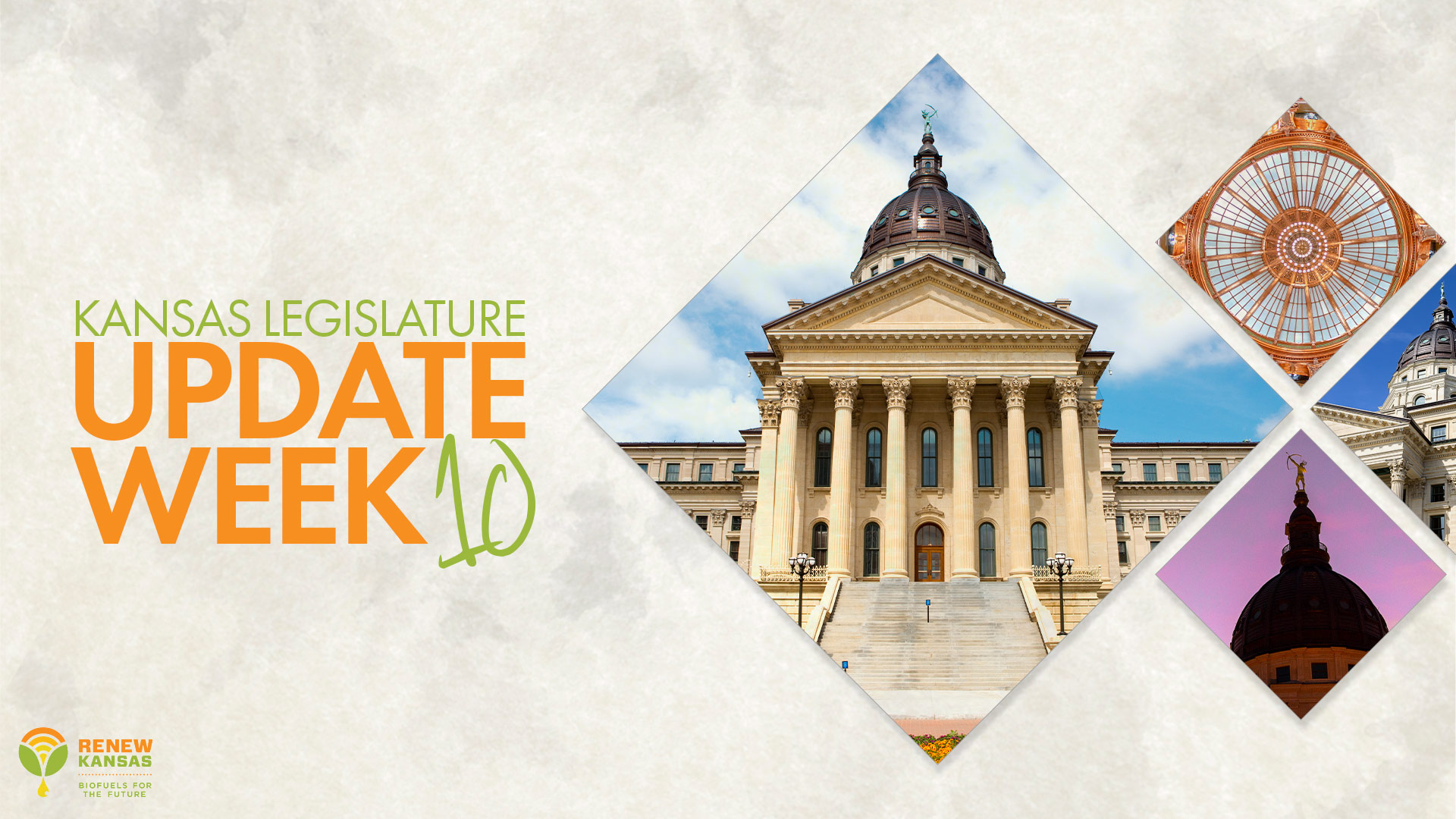 Posted at 15:05h in Advocacy by Editorial Team
0 Likes

There was a sense of urgency within the Kansas Legislature this week as the House and Senate continued hearing bills received from the opposite chamber in addition to introducing or taking action on controversial legislation. The House introduced two big-ticket items, including: a House Concurrent Resolution intended to protect Kansans from COVID-19 vaccine mandates, and House Bill 2434 which prohibits the employment of unauthorized aliens and requires employers to use the E-Verify program. In addition, Governor Laura Kelly announced that on March 22 the state will move forward into both phase three and four of the COVID-19 vaccine prioritization plan. Finally, the Senate had strong debate this week when it passed the Fairness in Women’s Sports Act to restrict involvement in women’s sports to biologically female athletes.

In early February, natural gas users across the state experienced historically high prices due to the polar vortex. Since then, Kansas Grain and Feed Association, Kansas Agribusiness Retailers Association, and Renew Kansas Biofuels Association have had numerous conversations with state and federal leadership regarding potential assistance in current relief of the price spikes and prevention of similar spikes in the future. As we continue these conversations, please let your association know how you have been impacted so we can best advocate for you.

In recent years, the Kansas Department of Health and Environment has looked at increasing the emissions fees to supplement a decrease in Air Quality Fee Fund revenues. Last year, the legislature included a budget proviso which restricted KDHE from raising fees and encouraged it to hold stakeholder meetings to find a compromise. This year, the department brought the proposal forward again, which includes a $1 million increase in revenues from fees. The House Agriculture Budget subcommittee will hear a presentation from KDHE about its proposed increase in fees and expected expenditures. Your association will continue to work to find a solution which maintains the integrity of the fund while minimizing the financial impact on those which it regulates.

Kansas has the highest electric utility rates in the Midwest. This week, the Senate Committee on Financial Institutions held hearings on Substitute for Senate Bill 245. Referred to as “securitization,” this bill would create the Kansas Grid Resiliency, Innovation and Dependability Act. The bill would authorize the Kansas Corporation Commission to regulate and authorize issuance of ratepayer-backed securitized bonds for the financing of capital expenditures that are currently included (recovered) in the rates assessed by an investor-owned utility in the state. The bill was amended to include language requiring any cost savings through bonding to be passed on to rate payers. The contents of Sub for SB 245 were then placed into House Bill 2072, and the bill was passed favorably from committee.

On Wednesday, March 17, the House Judiciary Committee held a hearing on Senate Bill 172. This bill would create multiple felony crimes for criminal trespassing or damage to a critical infrastructure facility (CIF), as defined by the bill. These crimes currently exist as misdemeanors under Kansas Law. As defined in the bill, critical infrastructure facilities would include biofuel processing facilities. Renew Kansas Biofuels Association was a proponent to the bill, which had previously passed the Senate on a vote of 29-9.

Property Tax Bill Requiring Escrow of Payments Made Under Protest

The House Tax Committee passed House Bill 2272 favorably from committee on Thursday, March 18. The bill would amend Kansas property tax law to ensure that taxes paid under protest are not budgeted for expenditure by local taxing authorities. The bill would prohibit a county treasurer from distributing any portion of a tax payer’s residential or commercial property taxes when those taxes exceed the preceding year’s taxes (by $500 for residential, and $5,000 for commercial), and those taxes are paid under protest. The bill requires the escrowing of those taxes during protests concerning proper classification and valuation. These protest payments would be placed into an escrow account until such time as the tax appeal is final.

This week, the Legislature passed Senate Bill 40, a bill amending the state’s emergency management law, installing new checks on powers of the governor, health officers, and school boards to manage the COVID-19 pandemic and future disasters. The Senate passed the bill 31-8 and the House by a vote of 118-5. The bill limits the power of the Governor, the state health secretary, and local public health officers to issue orders. It also gives Kansans more power to legally challenge emergency orders at all levels of government if they think their rights have been violated. The Legislature passed the bill about two weeks before the state’s existing emergency declaration expires on March 31. Passage of the bill would repeal the more than 60 executive orders issued by Governor Laura Kelly under the pandemic. The measure now goes to Governor Kelly for consideration.

Senate Bill 267, passed by the Senate on final action on March 17, includes fiscal year 2021 expenditures of $21.3 billion, with $7.6 billion financed through the State General Fund (SGF). The Senate Ways and Means Committee previously adopted an amendment to direct $60,000 of SGF to the Kansas Dept. of Agriculture’s Grain Warehouse Program in order to supplement the fee increases proposed by the agency in Senate Bill 143. While on the floor, the bill was amended to include a provision which requires contractors with state agencies to use the E-Verify system to confirm the eligibility of their employees to work in the United States. The provision would apply to state contractors that do at least $50,000 in business with the state. Once the House has compiled and passed its version of the budget, the two chambers will go to conference committee to work out the differences.

On Wednesday, the Senate Commerce Committee continued its hearing on Sub for House Bill 2196. As amended, this bill would provide for transfers of federal coronavirus relief aid or State General Fund moneys to the Employment Security Fund in order to shore up the fund following the loss of hundreds of millions of dollars in fraudulent payments; create the Unemployment Compensation Modernization and Improvement Council; require the Kansas Department of Labor (KDOL) to modernize its information technology (IT) infrastructure; make temporary changes to the membership of the Employment Security Review Board; make changes to Employment Security Rates tables; require the Secretary of Labor to provide tax notifications and certain Employment Security Fund Data Reporting; provide for certain employer account protections; prohibit the continuation of federal unemployment compensation programs using state funds; adjust thresholds for maximum benefits; modify the shared work program; and make other employment security compensation changes. The Senate Committee on Commerce will take final action on the bill next week.

On March 16, the House passed House Bill 2287 on a vote of 115-9. This is a workforce development bill that would create the Kansas Promise Scholarship Act to provide postsecondary education scholarships to students attending any Kansas community college, technical college, or two-year associate degree program or career and technical education program offered by a private postsecondary educational institution accredited by the Higher Learning Commission with its primary location in Kansas. The bill was supported by Kansas Grain and Feed Association, Kansas Agribusiness Retailers Association, and Renew Kansas Biofuels Association.

Substitute for House Bill 2066 would expand the military spouse and service member’s expedited licensure law to all applicants who have, or intend to establish Kansas residency. On Wednesday, March 17 the Senate passed the bill on emergency final action. The enactment date was amended on the Senate floor so the bill will now go to conference committee.

On Wednesday, March 17 the House Committee on Taxation held a hearing on House Bill 2421, a bill which includes corporate income tax modifications for global intangible low-taxed income, business interest, capital contributions, and FDIC premiums; allows an individual to itemize deductions despite not itemizing their federal return; and exempts from income compensation due to unemployment insurance ID fraud. A similar bill, Senate Bill 22, was passed by the Senate but seems to have stalled due to amendments which created a large fiscal note.

Other Bills of Note:

HB 2316 eliminating the prohibition of a surcharge for payments made with credit and debit cards. House Taxation Committee advanced bill favorably

HB 2434 requiring business entities and public employers to register and use the e-verify program. Introduced this week