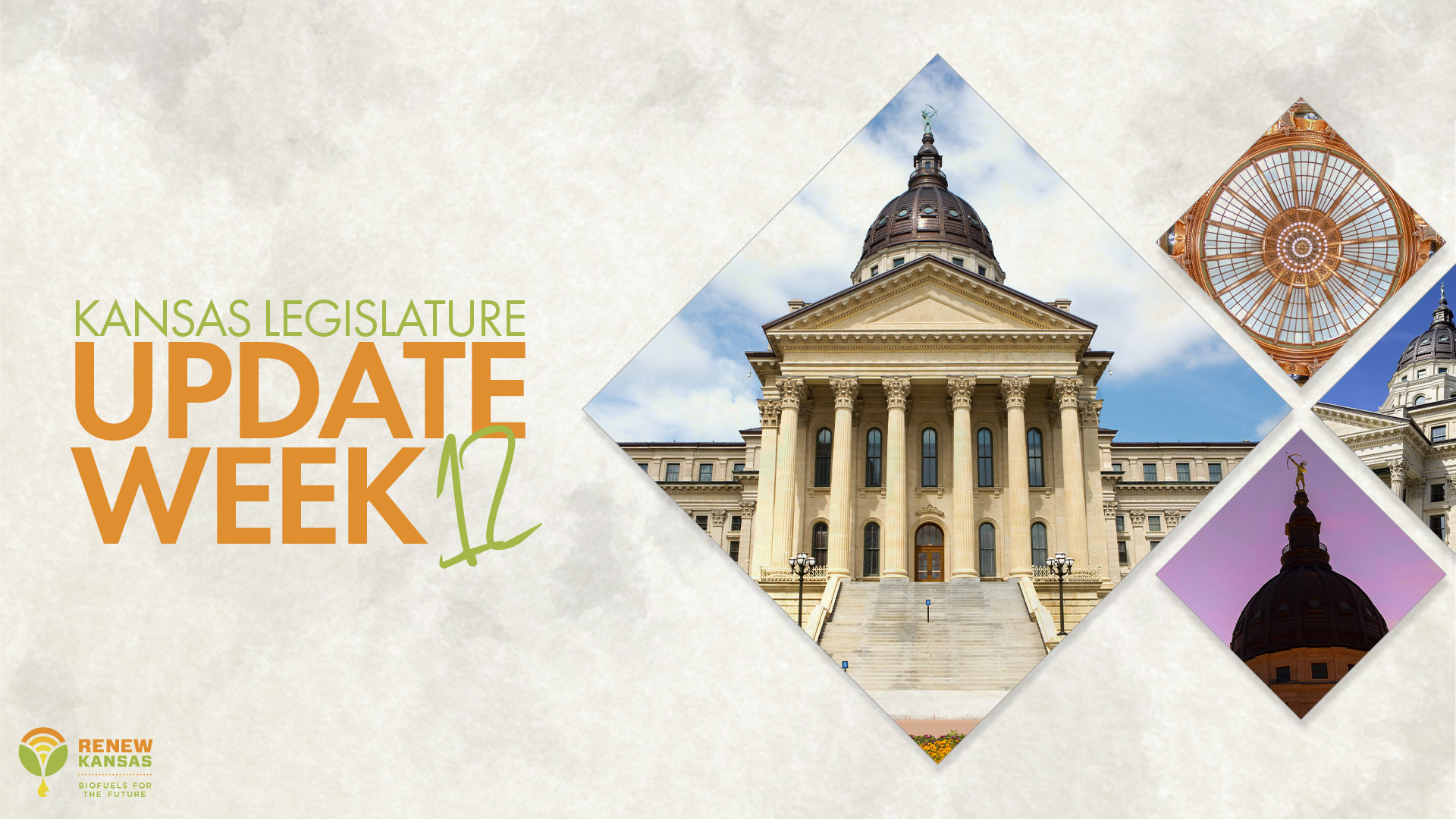 Posted at 14:24h in Advocacy by Editorial Team
0 Likes

With just one week left in the regular legislative session, the House and Senate debated and took action on many bills during this shortened three-day week. Bills of note included: action on the unemployment insurance fund and confirmation of the new Secretary of Labor; final passage of a multi-tiered income tax bill; advancement of a complex property tax bill and the Governor’s signature on a bill repealing the property tax lid; the signing into law of a bill providing limited immunity to businesses in regard to the pandemic; and, re-issuance by Governor Kelly of a dozen executive orders related to the COVID-19 pandemic. Next week will bring continued floor debate and the bundling of bills through conference committee work. First adjournment will likely come sometime late Friday, April 9. The legislature will then take a three-week break before returning for a brief veto session and to work on an omnibus appropriations bill.

This week, the House concurred with Senate amendments to Sen Substitute for HB 2072. This bill would create the Utility Financing and Securitization Act (UFSA) to allow for the securitization of utility assets to recover energy transition costs for certain regulated electric public utilities. The bill was amended to include language requiring any cost savings realized by the utility through bonding to be passed on to rate payers. The bill would also allow certain regulated electric and natural gas public utilities to pursue securitization to finance certain extraordinary expenses, such as fuel costs recently incurred during the extreme weather events. The bill now proceeds to the Governor for consideration.

On Friday, March 26, Governor Laura Kelly signed Senate Bill 13 into law. This bill repeals the existing property tax lid – put in place by the legislature in 2015 – which generally required voters to approve any local property tax increase higher than inflation over the previous year. While removing the public vote, SB 13 will now require notice and a public hearing in order for any local taxing authority to increase taxes above a revenue neutral rate (no inflation factor). Other provisions in the bill prohibit valuation increases of a property due to normal maintenance, and will allow the collection of partial payments or payment plans for property taxes.

This week the House and Senate Tax Committees met to consider Senate Substitute for House Bill 2104, a bill that contains the contents of multiple property tax bills, including Senate Bills 98, and 119. The Conference Committee agreed to the provisions of the bill and also added the provisions of Senate Bill 72, concerning qualifications for county appraisers and BOTA members. The conference committee then removed language that would have reauthorized the statewide 20-mill school property tax levy dedicated to schools. On Wednesday, the Senate passed the conference committee report on HB 2104 on a vote of 25-14. The House will take the bill up for action next week.

Senate Bill 98 would ensure that, in a hearing before a Kansas District Court, the county retains the burden of proof on the county appraiser’s valuation and classification. The bill also extends the time a state board of tax appeals member may continue to serve after such member’s term expires. In addition, the bill would allow the Governor to temporarily appoint former board members as necessary. Kansas Grain and Feed Association and Renew Kansas Biofuels Association were proponents to the bill.

Senate Bill 119, explained in greater detail here, includes many positive changes to the Kansas property tax system that were spread out over a handful of bills last year. Of particular note, the bill would prohibit the Board of Tax Appeals from increasing the appraised valuation of property as a result of an appeal or an informal meeting concerning the property. Kansas Grain and Feed Association and Renew Kansas Biofuels Association testified as proponents.

Senate Bill 172 would create multiple felony crimes for criminal trespassing or damage to a critical infrastructure facility (CIF), as defined by the bill. These crimes currently exist as misdemeanors under Kansas Law. As defined in the bill, critical infrastructure facilities would include biofuel processing facilities. While on the floor, an amendment was adopted to clarify that the language protects Kansan’s right to peacefully protest. Renew Kansas Biofuels Association testified in support of the legislation. On Tuesday, the Senate concurred with the House amendments and passed the bill on a vote of 37-2. The bill now proceeds to Governor Kelly for consideration.

Senate Substitute for House Bill 2196 would provide for transfers of federal coronavirus relief aid or State General Funds to the Employment Security Fund in order to recover from the loss of hundreds of millions of dollars in fraudulent payments. It would create the Unemployment Compensation Modernization and Improvement Council to oversee and recommend changes to the unemployment insurance system and the applicant claim process. The bill would also require the Kansas Department of Labor (KDOL) to modernize its information technology (IT) infrastructure by the end of 2022, make temporary changes to the membership of the Employment Security Review Board, and alter the Employment Security Rates tables. In addition, the bill would provide for certain employer account protections, prohibit the continuation of federal unemployment compensation programs using state funds, adjust thresholds for maximum benefits, and make other employment security compensation changes. The bill also ensures that employers are held harmless for any fraudulent unemployment claims filed in the business’ name. Employers who have paid for these claims since March 15, 2020, are to be refunded through the unemployment insurance trust fund. The unemployment insurance trust fund will be reimbursed through federal funds coming into the state, up to $500 million. The Senate passed the bill out unanimously on a vote of 40-0. The bill now goes to the House for consideration.

On Wednesday, the Senate unanimously confirmed Gov. Laura Kelly’s choice of Amber Shultz as the new Secretary of Labor. The position had been filled by acting secretaries following the resignation of Secretary Delia Garcia last summer. Shultz most recently worked as the general manager of the Municipal Services and Operations Department for the City of Lawrence. She had also previously worked as deputy director of public works for the City of Topeka. Shultz takes over as head of an agency that was the focus of weeks of hearings in the House and Senate due to both delays in unemployment payments to Kansans, and on the possibly more than $600 million in reported fraudulent payments from the state unemployment insurance fund during the COVID-19 pandemic.

On Tuesday, Senate Bill 50 was sent to the Governor after passing the House, 81-43, and the Senate concurring, 30-10. Senate Bill 50 would provide corporate income tax modifications for global intangible low-taxed income, business interest, and capital contributions. The GILTI provision in Senate Bill 50 would make 100% of GILTI deductible (exempt) beginning in tax year 2021. The bill also includes the contents of HB 2239, allowing net operating losses to be carried forward indefinitely; and HB 2106, extending the deadline for corporate filing deadline. The bill would also require marketplace facilitators to collect and remit sales tax. Senate Bill 50 is reported to have an estimated fiscal note (cost to the state) of $300 million over three years. The fiscal note on a similar bill, Senate Bill 22, was closer to $500 million. The bill now goes to Governor Kelly, where it could be vetoed. The House vote was 81-43, which is three votes short of the 84 necessary to override a veto. There are concerns by certain conservatives on voting for the bill because they disagree with the internet sales tax piece and see it as a tax increase. In the Senate, 27 votes are needed to override a veto.

Senate Bill 65 would amend the High Performance Incentive Program (HPIP) economic development program in order to remove certain workforce training requirements from the program. Under current law, taxpayers that claim the HPIP investment tax credit are required to participate in either the Kansas Industrial Training (KIT) or Kansas Industrial Retraining (KIR) programs. The bill would decouple the tax credit from participating in those programs. Removing the training requirement from HPIP will provide more flexibility in using the training programs, and will likely increase the number of companies that qualify for the HPIP tax credit. The House also inserted the contents of Senate Bill 91, which would allow for a company to transfer up to 50% of its earned but unused HPIP tax credits to another individual or entity. The Senate concurred to the House amendments, and the bill will now be presented to the Governor for consideration.

On Wednesday morning, the Senate voted 30-10 to concur with the House amendments to SB 283. This bill would amend the COVID-19 Response and Reopening for Business Liability Protection Act (Act) to extend the expiration date of the statute governing COVID-19 immunity for persons conducting business in the state, until March 31, 2022. This Act establishes that any business that is acting in accordance with the public health directives that are applicable to the business activity taking place would not be held liable for the exposure. Following passage by the legislature, the bill was quickly enrolled and signed into law by Governor Kelly.

House Bill 2203 would allow the department to retain fees collected for the Kansas asbestos control program and would end an historic practice of annually transferring money from the – unrelated – Air Quality Fee Fund to cover the asbestos program budget. This transfer from the Air Quality Fee Fund to the asbestos program was viewed by industry as an inappropriate use of fee funds. For that reason, Kansas Grain and Feed Association, Kansas Agribusiness Retailers Association, and Renew Kansas Biofuels Association testified in support of the legislation. The Senate amended the bill and passed it favorably 39-1. It now returns to the House Chamber for a motion to concur or nonconcur.

On April 1, 2021, Governor Kelly issued Executive Order 21-18 providing temporary provisions for employer payment of income tax withholding for work performed in another state. However, in the event that the executive order is revoked by the Legislature, an amendment with similar language was added to House Bill 2106 to place the temporary withholding relief in Kansas law through December 31, 2021. This bill will now go to the House to concur or non-concur.

On Thursday, April 1, Governor Kelly announced her reissuance of a dozen executive orders related to the pandemic. One such Order, Exec. Order 21-14, would require Kansans to wear a face covering in certain situations when they are unable to maintain social distance. However, at 1:30 pm on April 1, the LCC met and revoked Executive Order 21-14. This action by the LCC was consistent with resolutions (House Resolution 6015 and Senate Resolution 1717) passed by the House and Senate earlier in the week urging the LCC to revoke any executive order issued by Governor Kelly that required statewide face coverings. With the revocation of Executive Order 21-14, counties may still issue their own mask mandate or other guidelines.

Other Executive Orders reissued by Governor Kelly on April 1: