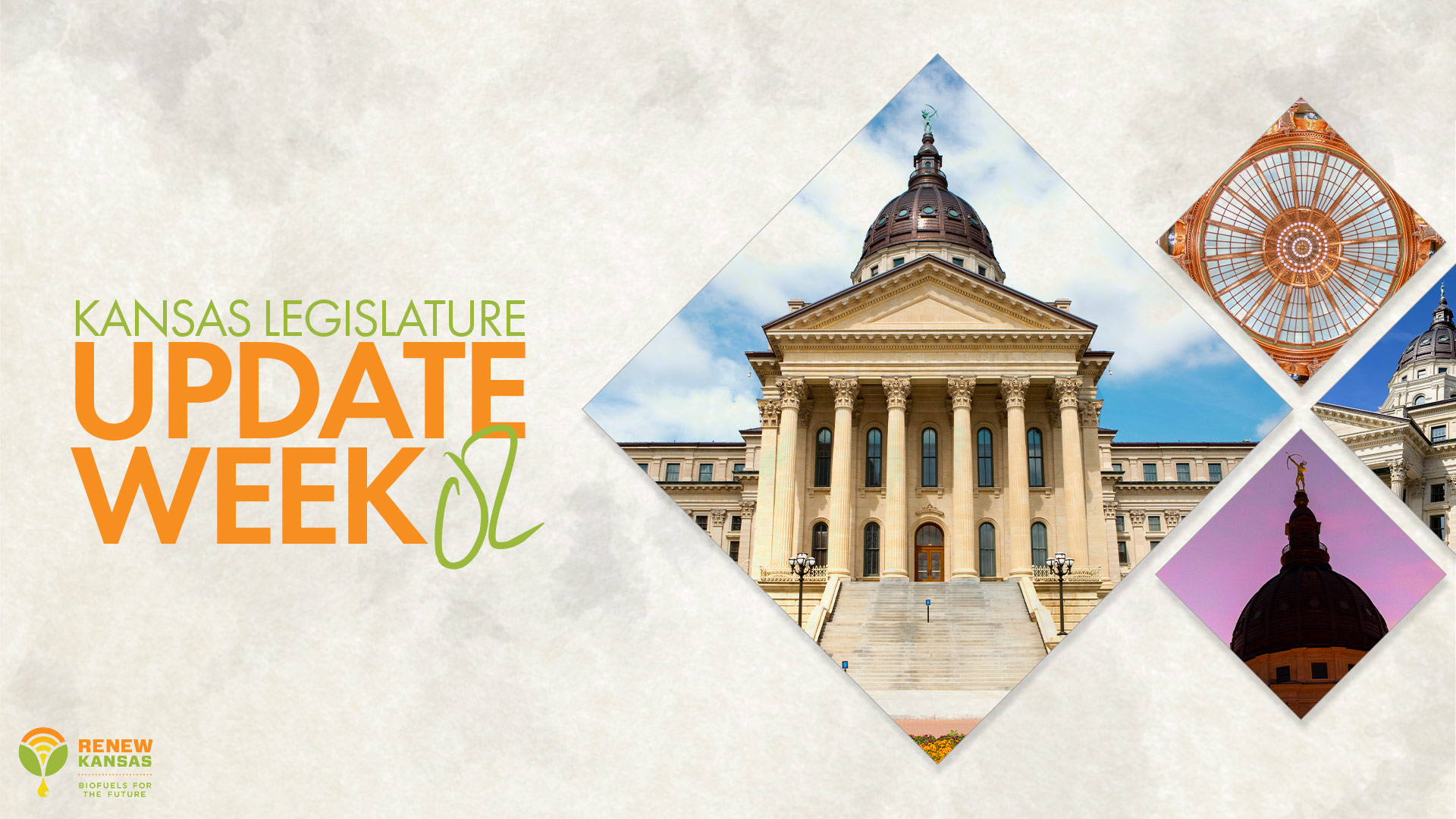 Posted at 14:59h in Advocacy by Editorial Team
0 Likes

This week, the legislature introduced many new bills and even began to hold hearings. There was discussion around the capitol on the recent listing of the Lesser Prairie Chicken as a threatened species in Kansas, and the negative impacts this would have on various industries in our state, which culminated in the introduction of a Senate Resolution pushing back on the listing. Here are some of the other highlights from this week.

Renew Kansas Biofuels Association is assembling legislation to allow Kansas industries to pursue carbon capture and sequestration (CCS) projects. The legislation will seek to amend Kansas law to allow for the permanent underground storage of carbon dioxide in UIC Class VI injection wells. By capturing and sequestering carbon dioxide (CO2), the biofuel industry is able to lower the carbon intensity score of their fuels, increasing its value and marketability. Most Midwest states have already adopted this type of legislation allowing long-term CO2 sequestration to be conducted more easily in their state. CO2 sequestration wells require a UIC Class VI injection permit issued by USEPA. States can apply to EPA for “state primacy” of these permits, which means USEPA would delegate its authority to the state to regulate the storage facilities. The proposed legislation will amend the Kansas Carbon Dioxide Reduction Act to include provisions from legislation passed in Indiana in 2022 (House Bill 1209), and Nebraska in 2021 (LB650.pdf). The bill will also direct the Kansas Department of Health and Environment to apply to USEPA for Kansas primacy over UIC Class VI permits. This bill will grant KHDE authority to adopt regulations to assess fees to administer the injection program and for the costs for long-term monitoring of closed storage facilities. In addition, the bill will allow the transfer of ownership and long-term liability of the stored CO2 to the state upon certified closure of the storage facility.

Senate Bill 8 was introduced which would reduce penalties for the late filing, or failure to file, personal property renditions and the discovery of escaped personal property. This bill could be especially important for the grain elevator industry following the 2022 Kansas Court of Appeals decision finding that grain elevator machinery and equipment should be property classified as personal property rather than as fixtures to the realty. The bill is scheduled for hearing on Thursday, January 26, 2023, in the Senate Committee on Assessment and Taxation.

This week, two bills were introduced which would seek to direct the Kansas Secretary of Agriculture to “establish a division of sustainable agriculture” that would “apply for federal grant funds under the greenhouse gas reduction fund to assist farmers in converting to renewable energy and sustainable agriculture practices.” House Bill 2091 was introduced in the House by Representatives Michael Murphy (R-Sylvia), Joe Seiwert (R-Pretty Prairie), and Dennis “Boog” Highberger (D-Lawrence). In the Senate, the bill was introduced as Senate Bill 71, a bipartisan bill with the sponsors Senate Majority Leader Larry Alley (R-Winfield) and Senator Marci Francisco (D-Lawrence). We have proposed a friendly Amendment to the sponsors of the bills and asked that it be adopted. Rep. Murphy agreed to seek adoption of our amendment in the House Ag Committee. Senator Francisco is on the Senate Ag Committee and said she will support our amendment.

With an estimated $2.3 billion ending balance for fiscal year 2023, and an estimated ending balance of $3.24 billion for fiscal year 2024, the enveloping question for the legislature is how to best spend those funds. As an answer to that question, Senate Bill 67 was introduced this week which would transfer an additional $1 billion from the state general fund to the budget stabilization fund at the end of the current fiscal year. This would be in addition to the roughly $1 billion that was transferred to the fund on June 30, 2022.

Kansas currently uses a three-factor system for apportioning income between states for corporate income tax purposes. Legislation has been introduced in recent years to allow corporate taxpayers the option to elect which methodology to use when apportioning their corporate income between Kansas and other states in which it operates to determine tax liability. The proposed legislation would allow certain taxpayers, based on NAICS codes included in the bill, to elect to use a single-factor apportionment formula based on sales in the state to determine corporate income tax liability. This week, similar legislation was introduced in the House Tax Committee as House Bill 2110. The bill is estimated to have a cost to the state of approximately $20 million. However, additional NAICS codes have been added to the bill this year which may increase this cost estimation.

This week, the Kansas Chamber requested introduction of House Bill 2061 and Senate Bill 61 which would create a flat tax and remove the state’s three tax brackets for individuals into one and use excess revenues to lower income tax rates. The bill calls for a 5 percent income tax rate for individuals while exempting $15,000 in income for individuals and $30,000 for married couples. The bill would also set a rate of 5 percent for corporations, which now pay 4 percent on net income plus 3 percent on net income exceeding $50,000. The bill also would continue to buy down income tax rates using revenues in excess of estimates in the out years. A similar bill last year, setting a flat tax rate for individuals at 4.75 percent, was estimated to have cost the state about $500 million over three years.

Governor Laura Kelly has recommended speeding up the scheduled full repeal of the state sales tax on food products. The tax was reduced from 6.5 percent to 4 percent on Jan. 1 of this year, and is scheduled to be reduced to 2 percent in 2024, and to zero in 2025. Governor Kelly has recommended changing the law to eliminate the state sales tax entirely – or “axe the tax” – beginning April 1, 2023. It is thought that the full cost of the repeal might frustrate passage of the proposal. A compromise proposal has been discussed of fully repealing the sales tax but narrowing the scope of qualifying products. Multiple bills, including House Bill 2111, have been filed to achieve this goal.

This week, the House Water Committee received a briefing from the Kansas Water Office on its 2023 Annual Report. The Water Office discussed its high priority issues, such as declines in the High Plains Aquifer; reservoir sedimentation; water quality and algae blooms; and flood and drought events. The Water Office also gave a presentation on how funds were used last year for the State Water Plan Fund. Also this week, the committee received a presentation from Earl Lewis with the Kansas Dept. of Agriculture’s Division of Water Resources.

Right of First Refusal for Electric Transmission Line Build Out

Kansas has the highest energy rates in our region. In recent years, legislation was introduced to reduce rates while ensuring reliable service. This week, Senate Bill 68 was introduced in the Senate Utilities Committee. The bill would allow energy producers a Right-of-First-Refusal to buildout new electric transmission lines assets in the state. The bill is likely to be heavily opposed by commercial and residential utility rate payers.

Last year, legislation was passed and sent to the governor that would have prohibited cities and counties from regulating plastic and other containers designed for the consumption, transportation or protection of merchandise, food, or beverages. Governor Kelly vetoed the bill to the legislature. There were not enough votes to override the veto, and the bill died. A similar bill has been introduced this year as Senate Bill 47. The bill will have a hearing on January 31, 2022, in the Senate Commerce Committee.

House Bill 2020 was introduced to clarify that the employment status of a driver of a motor carrier does not change as a result of the inclusion of safety improvements made to the vehicle. Similarly, House Bill 2019 was introduced to clarify the conditions for when a motor carrier driver shall be deemed an independent contractor for a transportation network company. Both bills are scheduled for hearing on Thursday, January 26, at 1:30 pm in the House Transportation Committee.