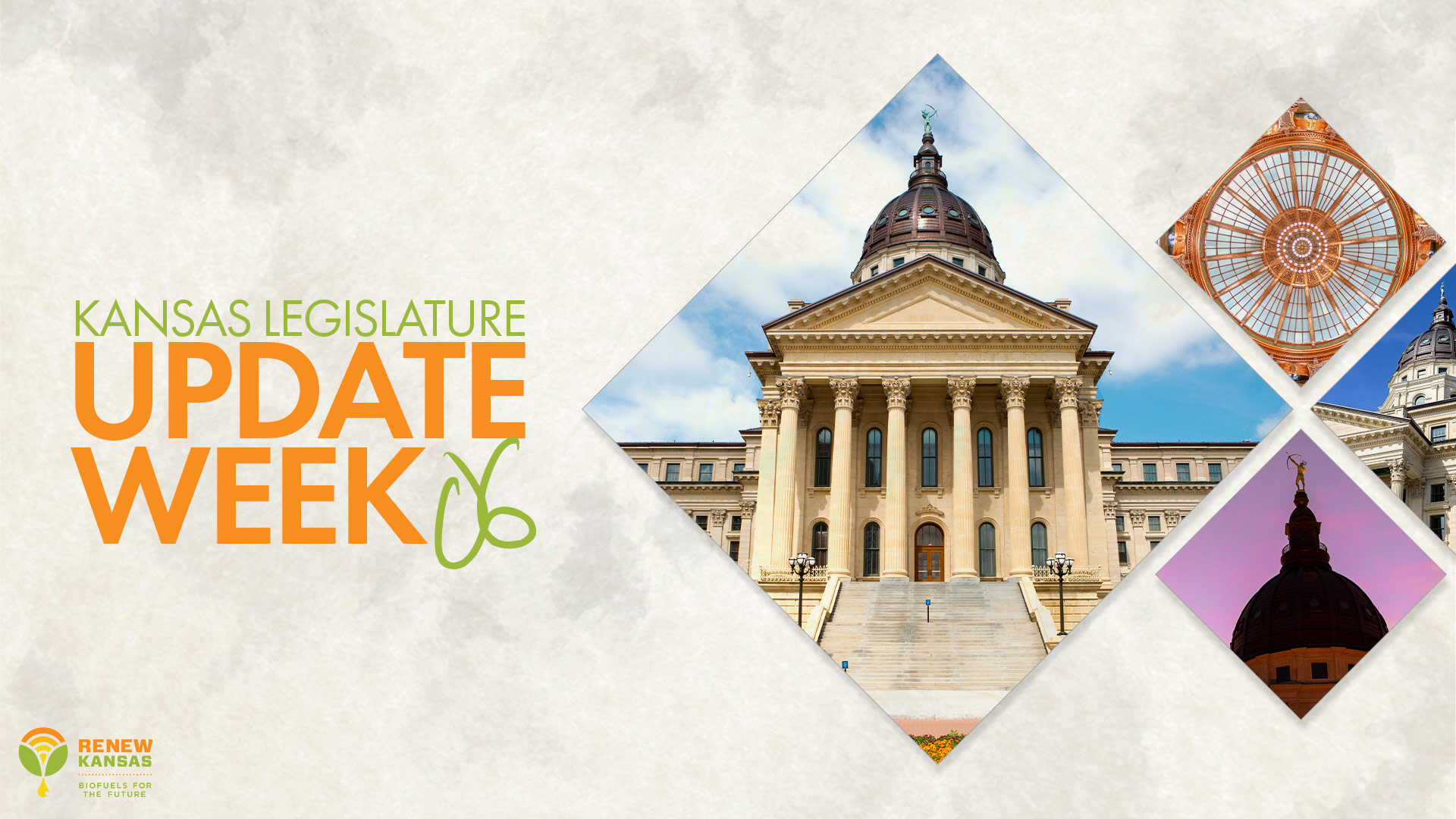 Posted at 15:09h in Advocacy by Editorial Team
0 Likes

This week brought further committee hearings, and debate and action on numerous bills by both the House and Senate Chambers. Find more details on this week’s legislative action, below.

House Bill 2196 was worked on by the House Committee on Commerce, Labor, and Economic Development on Thursday, February 18. This bill would hold Kansas employers harmless for fraudulent unemployment claims and requires the Kansas Department of Labor to immediately and fully credit employers’ accounts who had not been reimbursed for fraudulent charges in the 20 years leading up to July 1, 2021. It would also allow for the creation of an Unemployment Compensation Modernization and Improvement Council and provide for reimbursement of the Unemployment Insurance Trust Fund with money from the state general fund (SGF). The actual amount to be transferred from SGF would be determined following the certification of all fraudulent claims, but could be as high as $500 million. The committee will continue to work the bill next week.

The Senate Commerce Committee held a series of hearings for Senate Bill 177. This bill would amend the employment security law by, inter alia: creating an unemployment compensation modernization and improvement council; developing a new unemployment insurance information technology system; providing tax information to claimants; requiring publication of trust fund data; transferring money from the state general fund to the unemployment insurance trust fund to cover fraudulent benefit payments; and amend the shared work compensation program and other unemployment trust fund provisions. The Kansas Department of Labor testified neutral with concerns about security requirements being included in the bill, and the feasibility of a 20-year fraud payback provision. The committee is expected to take action on the bill next week. Kansas Grain and Feed Association, Kansas Agribusiness Retailers Association and Renew Kansas Biofuels Association supported this bill and House Bill 2196.

Kansas has the highest utility rates in our region. This important issue resulted in the Legislature commissioning a study in 2019 to determine the reasons for these high electric rates and ways in which they might be lowered. On Thursday, the Senate Committee on Financial Institutions held a hearing on Senate Bill 245. Referred to as “securitization” this bill would create the Kansas Grid Resiliency, Innovation and Dependability Act. The bill would authorize the Kansas Corporation Commission to regulate and authorize issuance of ratepayer-backed securitized bonds for the financing of capital expenditures that are currently included (recovered) in the rates assessed by an investor-owned utility in the state (Evergy). Proponents to the bill included a large utility company and the Sierra Club. Proponents indicated that the bonds proceeds would not have to go toward renewable investments. Opponents indicated that the bill does not specifically require any cost savings to be passed along to rate payers.

This week, the Senate Chamber passed Senate Bill 65 on a vote of 38-0. Amending the High Performance Incentive Program (HPIP) economic development program, the bill would decouple certain workforce training requirements from the program. Under current law, taxpayers that claim the HPIP investment tax credit are required to participate in either the Kansas Industrial Training (KIT) or Kansas Industrial Retraining (KIR) programs. The bill would decouple the tax credit from participating in those programs. Removing the training requirement from HPIP will provide more flexibility in using the training programs, and will likely increase the number of companies that qualify for the HPIP tax credit.

On Tuesday, February 16, the House Committee on Taxation held a hearing on House Bill 2186, a bill which would allow corporate taxpayers the option to elect how to apportion their corporate income tax liability between Kansas and other states in which it operates. Kansas currently uses a three-factor system for apportioning income between states for corporate income tax purposes. The proposed legislation would allow certain taxpayers, based on NAICS codes, to elect to use a single-factor apportionment formula based on sales to determine corporate income tax liability. The fiscal note on this bill is estimated to be $20.5 million annually. The following NAICS codes will be included in an amendment to the bill: 541690, Other Scientific and Technical Consulting Services (biofuel facilities), and 112210, hog farming / certain agricultural activities. Kansas Grain and Feed Association was joined by Cargill and the Kansas Chamber in providing proponent testimony. There were no opponents, but the committee asked many questions about the bill and the fiscal note.

On Thursday, February 18 the House Chamber passed House Bill 2155 on emergency final action with an 85-36 vote. The bill would authorize the Kansas Dept. Health and Environment (KDHE) to establish reportable minimum quantities of hazardous chemical spills in agency regulations. Currently, all spills of hazardous chemicals must be reported to KDHE, regardless of the amount. This bill would also allow the agency to provide technical guidance during a clean-up response, and permit cost-recovery from the responsible party for any state expenses related to a response to a release. In addition, the bill would allow KDHE to levy penalties for illegal dumping, refusal by a responsible party to clean up a release, or failure to timely report a release. KDHE has indicated that it intends to establish minimum thresholds in agency regulations that are consistent with federal requirements (EPA’s list of lists). Renew Kansas Biofuels Association, Kansas Agribusiness Retailers Association, and Kansas Grain and Feed Association, testified in support of the bill. In previous years, those associations worked with KDHE and other stakeholders to amend the bill language to limit the total civil penalty authority and limit the effect on agriculture chemicals. The bill now advances to the Senate for consideration.

Senate Bill 181 establishes the Elevator Safety Act. The legislation would require regulation of the design, construction, operation, inspection, testing, maintenance, and repairs of all elevators, man-lifts, and moving walkways. That legislation would also grant state inspectors the authority to adopt regulations over the industry and prohibit any inspections of elevators and conveyance equipment unless by a state-licensed inspection company. Similar legislation has been passed in Colorado, Missouri, and Oklahoma. During the hearing held by the Senate Committee on Federal and State Affairs on February 18, Kansas Grain and Feed Association testified neutral on the bill after working with proponents to ensure that language was included to exempt grain elevators, grain warehouses, seed processing facilities, grain processing facilities, biofuel processing facilities, feed mills, flour mills or any similar pet food, feed or agricultural commodity processing facility. KGFA stated that while it was neutral on the bill, it would strongly oppose the bill if the grain industry were not excluded. An amendment was also offered by the wind turbine industry to exclude them from the bill.

The Senate Chamber voted 29-9 this week to pass Senate Bill 52. The bill would allow the board of Sedgwick County Commissioners to order the removal or abatement of nuisances from any land within an unincorporated area with any incurred costs paid by the owner. Before the process of abatement begins, the county would have to obtain a conviction for county code violation regarding the nuisance no more than 12 months prior. Your association worked on an amendment to exclude any agriculture activity, including grain elevators and agribusiness facilities, which was adopted.

This week, the House passed House Bill 2087 on a vote of 109-13. This bill would amend the process by which administrative rules and regulations are adopted by state agencies. The bill would amend certain requirements of the economic impact statements that state agencies are required to prepare for proposed regulations. Kansas Grain and Feed Association, Kansas Agribusiness Retailers Association, and Renew Kansas Biofuels Association joined other stakeholders as proponents to the bill. The bill now advances to the Senate.

This week, the Senate passed SB 118 on a vote of 38-1. This bill would help local units of government consolidate more easily by establishing a procedure for cities or counties to assume the powers, responsibilities, and duties of any special district located within a city’s corporate limits or a county’s boundaries and would provide for the dissolution of the special district. Special districts would include airport authorities, cemetery districts, draining districts, fire districts, port authorities, and similar taxing authorities. Enactment of the bill could result in efficiencies and consolidation of services, which may decrease expenditures for local units of government. Proponents to the bill included the League of Kansas Municipalities, Kansas Grain and Feed Association, Kansas Agribusiness Retailers Association, Renew Kansas Biofuels Association, and the Kansas Chamber. The House Committee on Local Government will take action next week on companion bill HB 2177.

On Wednesday, February 17, the House Committee on Commerce, Labor and Economic Development held a hearing on House Bill 2287, which would create the Kansas Promise Scholarship Act. Administered by the Board of Regents, the Act would make this new scholarship available to students attending any Kansas community college, technical college, or two-year associate degree program or career and technical education program offered by a private postsecondary educational institution accredited by the Higher Learning Commission with its primary location in Kansas. There were many proponents to the bill, including Kansas Grain and Feed Association, Kansas Agribusiness Retailers Association, and Renew Kansas Biofuels Association.